The Traffikator Project: How we developed a Nigerian Social Traffic App

(Sensei is at his desk, writing code, Janus and Higgs are playing “FIFA 2012” on PS3, while I’m  playing the fool)

Sensei: Hey guys, check this out, do you know you can actually calculate traffic density  anywhere through smartphones?

Sensei: Well, using a combination of crowd-sourced traffic updates and geolocation, I think we can create a live stream of real-time road traffic data

Janus: Hmm, I can see where this is going; so if 1 000 people download this app for instance, it’ll be able to report the traffic in all of these people s locations based on their relative speeds

Unus: (interrupting everyone) Guys, I have a better idea; what if we do an app that can print money. An end to economic depression right? We could win a Nobel for that…

Higgs (totally ignoring Unus): Some sort of crowd  resourced app hey? Like you said, we can optimise the apps accuracy with data from Twitter and the internet.

Sensei: Yeah, you see I know I can code the algorithms to…

Unus: (interrupting Sensei): Guys! Best idea yet. Listen…. An app that can photosynthesize! Think about it? An end to global warming! An end to…

Janus: Unus, why don’t you just concentrate on marketing something ehn?

I had always assumed that our first major project would be something very grand. Maybe a digital campaign for Obama & the White House or something.  I could see us, four dashing young men working from four different locations (each in a Sheik-like-environment) sipping champagne and using the latest technology to communicate directly with the President of the United States of America. I’m sure in my location there’d be nubile women. Lots of them. Don’t ask me what the other guys will have at theirs. At least not here.

Unfortunately, in real life we work from much more drab settings. The only nubile woman in my environment is on my wallpaper. On my laptop, not even my real wall!

We were sitting around one day, wondering why nobody agreed with us whenever we said we were awesome, when Higgs & Sensei digressed and started to exchange ideas about a traffic app. We were all stupid enough to agree that we could develop one. And we were all crazy enough to attempt it.

a Nigerian digital solution provider a.k.a most awesome! It was founded by Higgs and I and then we convinced two of our best friends to join us . The two were Janus the diva, (For those of you who don’t know… a diva is the female version of a hustler) and Sensei who is a hustler (a hustler is …) . Our modus operandi was to kneel down and pay obeisance to both Janus and Sensei as they both regarded us from their respective pedestal of superiority and then hound their cell phones with calls threatening to commit suicide if they didn’t agree to become part of Chaos Theory. 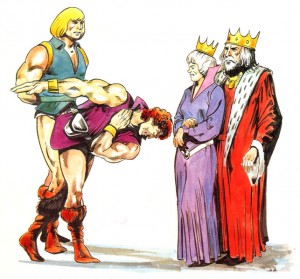 Editors note:
Higgs is the dude bowing down. Of course Unus is the awesome dude standing by cool and unruffled and not giving an ish.

Thus, Chaos Theory was formed. It was suggested by Higgs after much thought and totally approved by me (mostly because I was half asleep and had no idea what he was talking about).

But what has this got to do with Traffikator?

Plenty. You see, Chaos Theory is the brain behind Traffikator. Traffic is a huge issue in Nigeria. Already, there are dedicated Twitter accounts to traffic who monitor traffic and report to Lagosians eager to move around Lagos for business and leisure. There is even a traffic radio. So we figured an app that tells you where traffic is heavy and where it is free and delivers the information to your mobile would be a pretty cool idea. 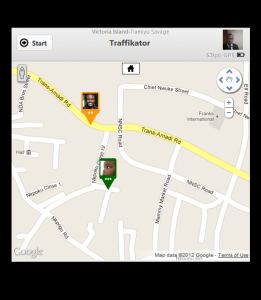 How does it work?

Well, it’s simple really. The app accesses the GPS tracker in your smartphone and figures out traffic density by calculating the relative speed of two or more Traffikator users on the same street.  What this means is that the more people who use and download the app, the more accurate it gets. It optimises the results it gets by accessing traffic data online via tweeter and other media.

What makes it special?

Apart from the fact that it was made by us?

It is a social tool too. You can communicate and socialise  with other people stuck in traffic via Twitter. But much more than that, Traffikator draws and aggregates data and information from several online social sources to give  even more accurate traffic reports. I’m guessing when Higgs , Janus & Sensei say technology has to be social, they mean just that.

Here’s what  Traffikator looked like the last time I checked 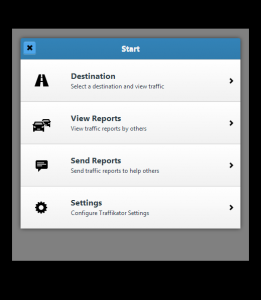 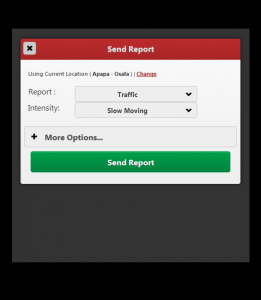 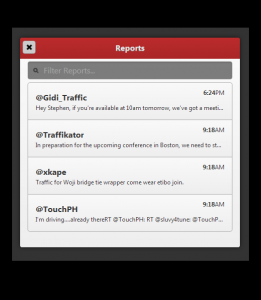 NB: these are screen shots of work in progress. They have a penchant for change mystically linked to Janus’s brainwaves

So, what exactly is the Traffikator project?

Almost all Lagosians are adversely affected by traffic everyday. We  might not be able to do much about alleviating the traffic, but we can get a lot more efficient and effective at reporting it.

The Traffikator project is a social experiment with which we intend to build an accurate traffic reporting network. Traffikator is our tool. All you have to do is download the app for free on your mobile phone  and and it will use data you send plus that of others to build a real-time, highly accurate traffic map of Lagos. The project will involve three phases:

After which we’re aiming for 500 downloads in Lagos.

Then we will, test, iterate and tweak the app

We will conduct further tests, iterate even more and tweak the Traffikator more.

After which we will continue to tweak, iterate and test ad nauseam, ad infinitum…

Please note that if you’re part of the Traffikator project at the alpha and beta phases, you will be eligible to varying forms of free subscription once Traffikator is launched.

Please watch this space for more news of Traffikator.

We will be launching the Traffikator logo anytime from now. Janus is working on that.

The alpha version of the app will be launched sometimes in August. We will let you know where the app is available for download soon.

We will be also be sharing with you videos, infographics & and other marketing ” thingy or the other”  materials  so that you can enjoy being part of this project. We promise they’ll all be creative, funny and entertaining.

ask@chaostheorycreative.com if you have questions

← Rise of the Planet of Apes: It’s all about mobile
An ode to Lagos traffic →